The Namman Muay® Thai oil or liniment is the first massaging oil especially designed for professional fighters. The properties of the the Thai oil made it the product to go for athletes who need a fast and effective warming agent for their muscles.
Available sizes
450ml
120ml
60ml 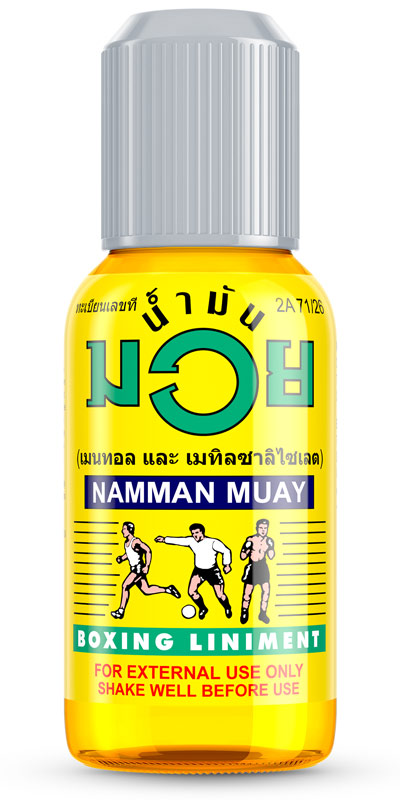 The roots of the Namman Muay® liniment can be found in traditional Thai herbal medicine, where for years the exact recipe was used by few selected Muay Thai gyms and only passed around fighting circles purely by word of mouth. It wasn’t until 1963, and the reign of Pon Kingpetch, Thailand’s first western style boxing champ, that Devakam’s miracle product would become a brand with mass appeal and global reach.

Kingpetch, trained at a gym owned by coach called Thongthos Intratat. A herbalist and practitioner of alternative medicine, Intratat was always looking for new ways on traditional Thai home remedies to help his team of fighters warm up and repair their sore muscles and joints after trainings and (too) frequent fights.

Intratat discovered that a fighter massaged with his home made Namman Muay oil was less injury prone and bashed up after contests. Intratat formed Devakam Apothecary Hall, his own pharmaceutical company, and began to manufacture the first Namman Muay products which are now used by millions of people all over the world. In honour of Pone Kingpetch, Thontos Intratat and their historical achievements a statue was raised in Hua hin in southern Thailand. 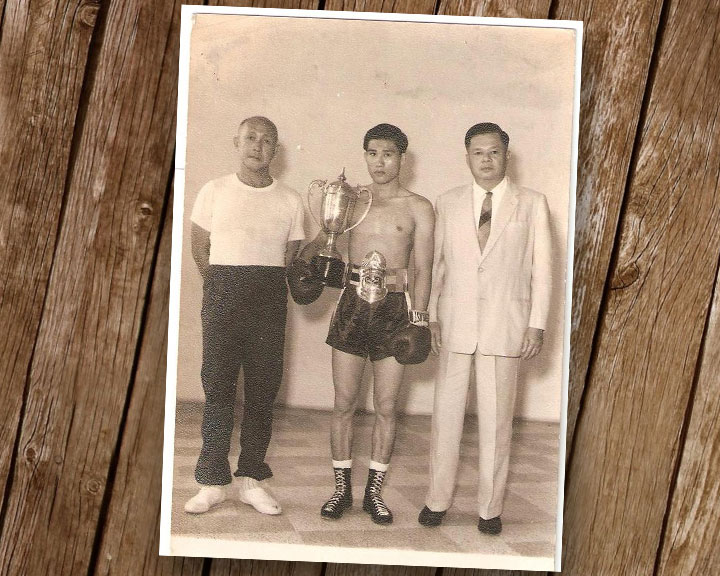 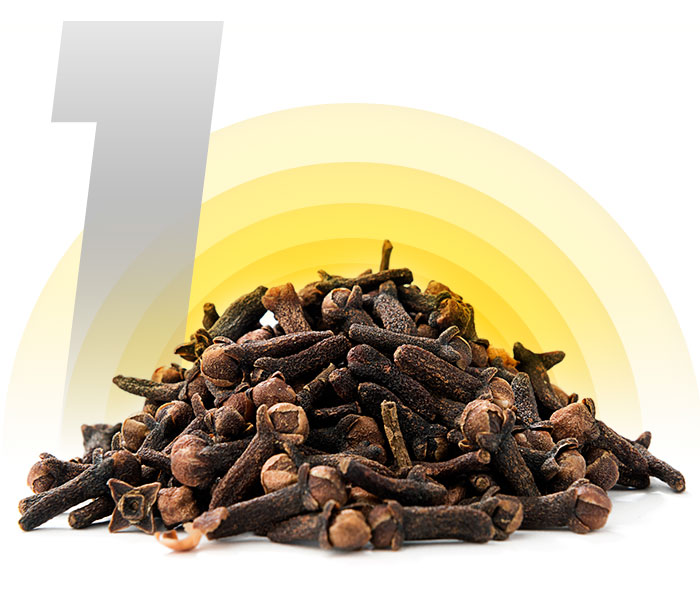 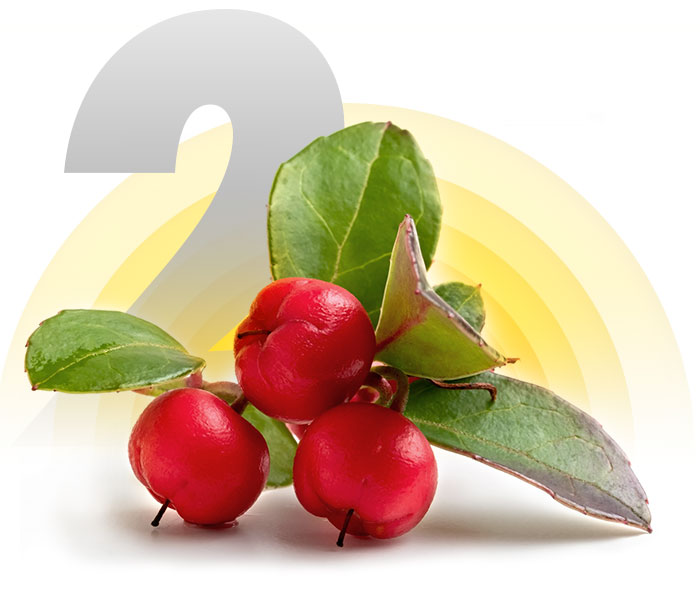 Wintergreen
Wintergreen oil is extracted from the leaves of the Gaultheria procumbens evergreen plant, has the ability to act like a natural analgesic, antiarthritic, antiseptic and astringent. Wintergreen oil primarily contains the active ingredient methyl salicylate, which makes up about 85 percent to 99 percent of wintergreen essential oil. 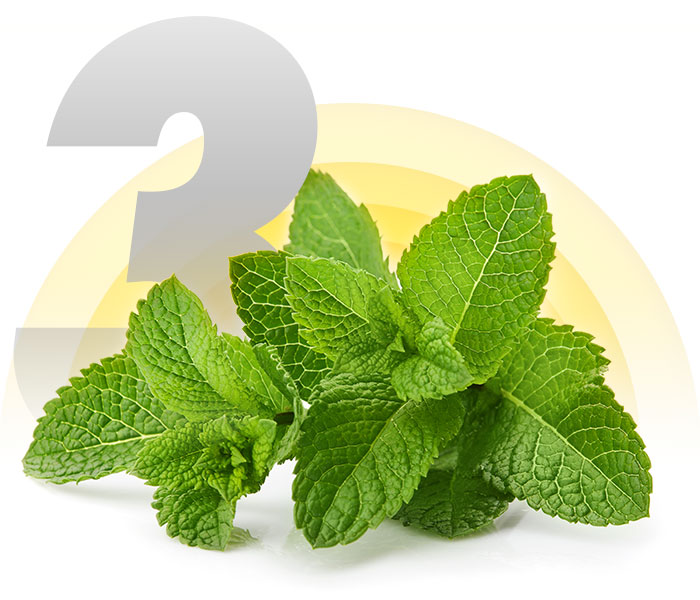 Menthol
Peppermint oil is a standout amongst the most essential oils. It can be utilized aromatically, topically and internally to address various health problems, ranging from muscles tiredness and joint stifness to seasonal allergies, to low energy and digestive problems.

Top athletes in combat sports recognized the effectivness of the Namman Muay® Thai cream making it the product to go for sport injury treatment. Professional fighters face dangerous situations every day during training and competition. Immediate care is required for these athletes in order to perform at the highest professional levels.
The Thai oils were originally concieved for western-style boxers who put their body to enormous stress during fights. The many benefits of the Namman Muay® Thai oil for the athlete's body when used pre & post exercise were quickly recognized by Muay Thai fighters around the world. 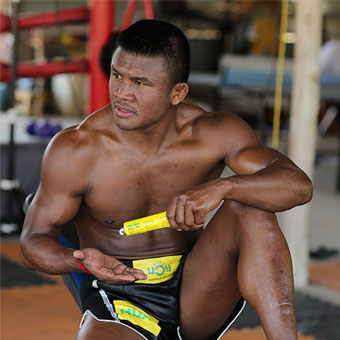 Buakaw Banchamek is Muay Thai and kickboxing legend. His real name is Sombat Banchamek (สมบัติ บัญชาเมฆ), but when fighting he goes by the name of Buakaw Banchamek ("Buakaw" means "White lotus" in Thai). Buakaw became Thailand's biggest sport ambassador after a successful transition to the kickboxing circuit by winning two prestigious K-1 World MAX titles in Japan. We proud ourselves that Buakaw is part of the Namman Muay® sponsored athletes. 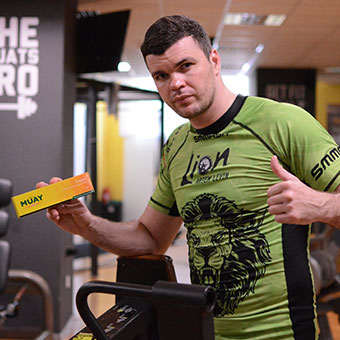 Artem "The Lion" Levin is multiple kickboxing and Muay Thai world champion. Artem is known for his creative and unpredictable fighting style that won him the Glory middleweight World title in Los Angeles among other professional titles such as WBC, WMC, WKN, It's Showtime and AKBC. He is also 6x IFMA World and 5x European Muay Thai champion. He currently trains at American Top Team in Miami, Florida. 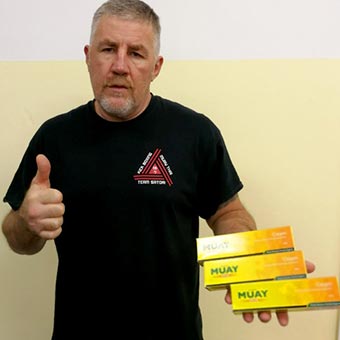 Alfio Romanut is a kickboxing hall of fame coach who's teaching talent created the greatest P4P kickboxer that ever walked on the earth - Giorgio Petrosyan. Romanut created a special fighting system that is rarely seen in kickboxing. It focuses on fighting your opponent at an 45° degree angle in order to nullify your opponent's counter attacks. His fighters are known in the world to have an extremly smart and disciplined style of fighting. 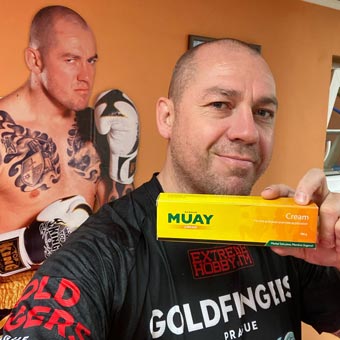 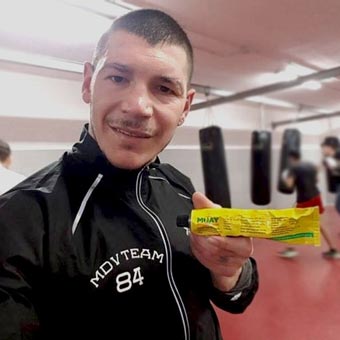 Uros Jurisic is a Slovenian UFC fighter from Slovenia, known for agressive striking style. Fighting out of American Top Team in Miami Floria, Uros is the current Titan FC welterweight champion with an unblemished score of 10-0. Jurisic is the latest addition to the stable of Namman Muay ® sponsored athletes.

The original Thai oil by Devakam is being used exclusively by professional martial artists, but everyday athletes who need to expedite their warmups use them as well. Read what our customers have to say after trying the liniments.

"If you train combat sports this is a must. The Thai oil loosens my muscles and gives me more flexibility!"
- Amanda R. 32 years

"There is no Muay Thai without Namman Muay!"

"If you enter a Muay Thai gym and there is no smell of the Thai liniments it's probalby a good sign to change gym :)"
- Roy B. 32 years

"Reccomended by a massage therapist"

"I use it regularly with my clients - they say that the heat helps them to loosen up more during my sessions."
- Nick F. 45 years

"Splash all over it!"

"I love this herbal blend! I had a very stiff neck and shoulders and decided to test it out. With just enough to glide over my skin, I warmed the oil with friction and massaged it in for just a minute or so. Within a couple of minutes I had no stiffness! "
- Glenn A. 29 years

"Maybe too intense for some...but not for me!"

"If you haven't tried before be prepared for the intense feeling of heat on your skin...for some it may be a little bit overwhelming, but soon after you will start exercising you will understand it's benefits."
- Barbara O. 27 years

"I am so happy to find the original Namman Muay liniment. Love this product and it is the only one that works for sore and achy muscles, arthritis and even chest congestion from a cold. It also arrived pretty quickly too!"
- Joshua W. 62 years

"A must for pre-workout!"

"Stuff is amazing. Helped my tired muscles after a long hike. Every night would put it on, and in the morning I was good to go. Has a very strong smell but hey, when your camping anything menthol smells exponentially better than yourself after hiking all day."
- Kevin R. 28 years

"Gets the job done!"